The President Muhammadu Buhari administration’s Appropriation Law tagged ‘Budget of Fiscal Sustainability and Transition’ has dominated public discourse since it was signed into law. This terminal budget of the administration stood at N21.51 trillion before it was reviewed upwards by the National Assembly’s addition of N1.32 trillion, representing 6.1%, to a mind boggling total of N21.83 trillion!

The National Association of Seadogs, Pyrates Confraternity notes with grave concern some key aspects of the 2023 national budget which gives cause for worry. The grim macroeconomic statistics in the budget offer no cheering news for Nigerians seeking a window of hope for an economy haemorrhaging under official financial leakages and which has been battered by poor and inconsistent economic decisions; incoherent monetary and fiscal policies supervised by a partisan Central Bank and a nonchalant political leadership that has allowed insecurity to fester in our country.

It is disheartening that a floundering economy, suffocating under the weight of debt obligations, is to be hit with more debt. In 2016, Nigeria’s budget deficit was N2.14 trillion but this has grown at breakneck speed in a space of seven years. For instance, President Buhari’s administration total revenue for the 2023 budget was N9.73 trillion, while its total expenditure was N21.83trillion; this leaves it with a deficit of N11.43 trillion representing an increase of 370.54% from 2016.

Incredibly, the Minister of Finance, Zainab Ahmed, had disclosed that 60% of national revenue is being planned to service debts in 2023 bringing the figure down from 80.6% used to service debts in 2022.  Worse, President Buhari’s government appetite for loans is apparently insatiable. Already as at the third quarter of 2022, the Debt Management Office (DMO) revealed that Nigeria’s total debt stock had climbed to N44.06 trillion. There are justified fears by economic experts and the DMO that the total debt burden could jump to over N70 trillion before the end of this year.

It makes no economic sense that a government that relies on loans to finance its spending would be budgeting N4.99 trillion for personal emoluments and overheads, the same amount it allocated for capital expenditure. More alarming is the reckless decision to budget N9.20 billion for honoraria, N6.75 billion for international training and N6.15 billion for refreshment and meals among other lavish expenses that are totally out of place in our desperate situation.

Regrettably, at the core of Nigeria’s economic woes sits an insipid ninth National Assembly that has been unable to restrain the Executive arm from excessive borrowing and call it to order over the financial recklessness undertaken on its behalf by the Central Bank of Nigeria. Rather than play its part as an institution that should be on the side of the people, playing oversight functions to checkmate the Executive, it has joined in the binge spending and reckless financial jamboree of the Executive branch.

In 2019, President of the Senate, Senator Ahmad Lawan defended borrowing for projects by the President Muhammadu Buhari’s led administration stating that the “Senate would not only approve loan requests by the President but also ensure strict oversight to make sure it was used for the purpose”. However, in a recent comment during his 64th birthday, Senator Lawan declared that “Government cannot continue to borrow on a yearly basis because it is not sustainable”. Yet, the National Assembly on his watch increased its own budget from the N169billion proposed by the Executive to N228.1 billion. This includes a staggering N30.17 billion for severance packages for National Assembly members. There can be no rational justification, moral or economic, for lawmakers budgeting bogus funds for themselves from a deficit budget.

The President Buhari-led government seems to be running out of ideas on how to arrest the current state of stagflation in the country and turn the economy around. On his watch, the profligacy of government officials has assumed a grotesque dimension and many more Nigerians have been pushed into poverty. Data from the National Bureau of Statistics (NBS), Multidimensional Poverty Index indicated that 63% of Nigerians (133 million Nigerians) are multidimensionally poor. With no hope of Foreign Direct Investment (FDI) to expand the economy and all attention on the forthcoming elections, respite is not in sight for Nigerians.

To urgently address the gathering economic storm, the National Association of Seadogs, Pyrates Confraternity calls on the Federal Government to cut wastage in governance, especially the recurrent expenditure. There are several aspects of the budget that add no value to economic development but only fund the extravagance of political office holders and these should be immediately reviewed and removed from the budget. This includes the budget for the National Assembly. Any plan to create additional government agencies should be jettisoned. This is not the time to increase the national wage bill.

We implore the Federal Government to intensify the war against oil theft. Its recent efforts are yielding fruits but it needs to deploy more resources to ensure all avenues through which Nigeria’s oil is being stolen are blocked. In addition to this, the Senate should shake off its self-serving posture and work for Nigerians by ensuring all revenue generating Ministries Departments and Agencies (MDA) remit what is due to government coffers. We urge President of the Senate, Senator Ahmad Lawan to walk the talk over the threat to “turn the heat on revenue-generating agencies for adequate revenue to fund the implementation of the N21.83tn 2023 budget”. As a sign of seriousness we expect the lawmakers to revisit its report released in May 2021 which indicted over 60 MDAs for failing to remit revenue meant for the government. The various officials behind this defiance should be fished out and sanctions meted out appropriately to curb impunity, while the monies should be recovered.

Government should pursue the diversification of the economy to improve exports with renewed vigour. If need be, the President should issue Executive Orders to encourage establishment of Small Medium Enterprises (SMEs), promote export policy and job-creation.

Nigeria’s economic turmoil cannot end without the Federal Government resolving the power supply issue in Nigeria. The absence of regular and adequate electricity has crippled productive activities and discouraged investment. This ugly drift should be redressed. It is incumbent on the Federal Government to speed up its investment and needed reforms in the power sector to improve power supply which is critical to industrialization and opening up of the economy for more investments.

The ball is in the court of President Buhari as a sense of responsibility to save the Nigerian economy from imploding thereby saving Nigeria from an impending disaster.

Nigeria's Education Sector At a Crossroads - The Time to Act is Now! It is on a very sombre note that Nigeria joins... 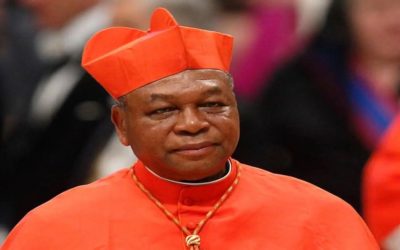