The Pyrates Confraternity was formed in 1952 by seven undergraduates of the University College, Ibadan in response to the prevailing predisposition, at the time, of notions of class privilege, elitism and indifference to the social realities of the nation, Nigeria, especially by students of middle class upbringing, scions of business tycoons and colonial aristocracy. At that time, the University College, Ibadan was the premier institution of higher learning in Nigeria and a prominent replication of all that was undesirable about the colonised Nigeria. Amidst this were a handful of students from poorer backgrounds who either stuck doggedly to their books, looking forward to the day when the prize of an academic degree would compensate their present indignities, or strove assiduously to be admitted to the sophisticated circle of their flashier peers. So it was that the Pyrates Confraternity was conceived as an organisational response to the eradication of those various forms of institutional decadence that pervaded the students’ environment at the time. It envisioned philosophies that were entirely non-conformist to the moribund conventional practices that fueled these tendencies and was intended to develop as a movement to resist the continuing negative growth prevalent in elitist, middle class Nigeria. It was against this background and to combat these negative tendencies that these seven students founded the Pyrates Confraternity (PC). The original founding fathers, otherwise known as the Original Seven, are: 1. Wole Soyinka 2. Ralph Opara 3. Pius Oleghe 4. Ikpehare Aig-Imoukhuede 5. Nathaniel Oyelola 6. Olumuyiwa Awe 7. Sylvanus U. Egbuche 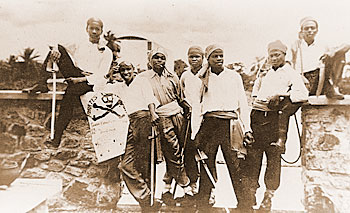 Evolution of the Pyrates Confraternity

From the pioneering base of University of Ibadan, the philosophies and movement grew and was exported to other institutions of higher learning that were emerging. The attraction to its objectives and accomplishments was such that it was to grow exponentially. By 1978, there were a total of 18 branches with thousands of members having passed through membership. The unique feature was that these members were or had passed through various universities in Nigeria at the time. On 31 October 1980 the organisation was formally registered with the Nigerian Federal Ministry of Internal Affairs under the Land (Perpetual Succession) Act Cap 98 with the name “National Association of Seadogs” RC No 1592. The variation in the original name was to reflect both the larger national outlook and incorporate an essential ingredient of the concept of seadogs as part of the visible identity. However, by the early 1970s, unsavory behavior of several imitator organizations began to emerge from the various campuses. Although they claimed to be fraternities, their behavior became so disturbing that, on 28 July 1984, in order to protect its integrity, NAS closed down all in-campus, student branches of the organization. The process of entry into the organization was realigned and streamlined over the years. For the past 15 years, new members, in country, are now derived only from university graduates who have completed national service under the National Youth Service Scheme.

NAS in the 21st Century

Today, NAS has evolved from a campus confraternity to a community focused, advocacy organisation with 60 branches spread across Nigeria, South Africa, Europe, Asia, America and Canada. In addition to its other activities, it remains dedicated to social advocacy, humanitarian and charitable endeavours within and outside Nigeria or whatever society in which the members find themselves. The organisation has placed at the disposal of the society, its huge professional membership in virtually all areas of professional endeavour. Its membership can be found in various aspects of societal life within and outside Nigeria including the government and the private sector. Its willingness to help society reconstruct and to build is, and remains, an asset which society can and has been freely exploiting.