The National Association of Seadogs (Pyrates Confraternity) on Friday at the conference hall of Radisson Hotel, Ikeja Lagos in an historic event commenced its 70th anniversary with the unveiling of the logo and theme for the long celebration. The NAS Capoon, Mr Abiola Owoaje said the theme of the celebration ’70 Years of Service to Humanity’  “is a reflective encapsulation of our modest contribution to humanity”. 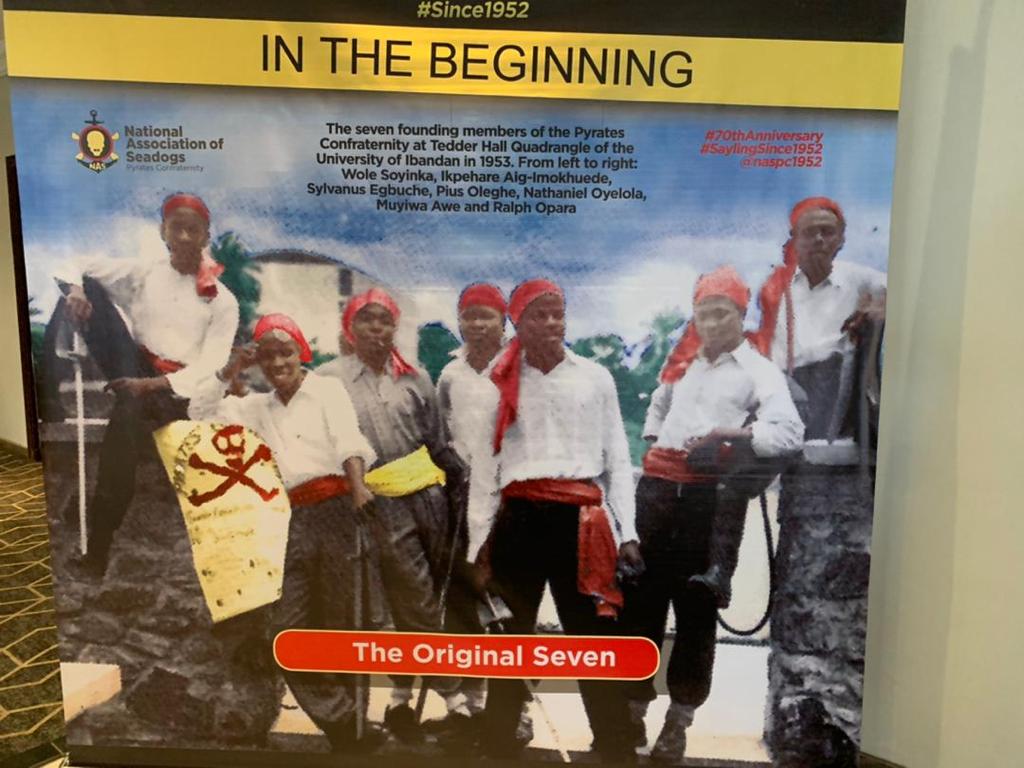 According to him the seven founders of the association, namely Wole Soyinka, Ralph Opara, Nathaniel Oyelola, Pius Oleghe, Olumuyiwa Awe, Ikpehare Aig-Imoukhuede and Slyvanus Egbuche, “took a giant revolutionary leap towards greatness and etched their names in the sands of time by standing up to obnoxious conventions to form the Pyrates Confraternity.”
Owoaje who in his address said the formation of Pyrates Confraternity in 1952 at the University College Ibadan was not just limited to fight for the oppressed noted that it was indeed a “trailblazing initiative”

“In 1952, when the Pyrates Confraternity was formed, its fundamental ethos was not just limited to fighting for the oppressed, speaking for the deprived, and resolving myriad injustices in the march towards the attainment of a just and egalitarian society. “Certainly, it was a trailblazing initiative by these seven undergraduates, which restored dignity, confidence, and an enduring sense of worth and justice to a large segment of Nigeria’s population in those heady days of colonial subjugation,” he said. Owoaje disclosed that from one deck in 1952, Pyrates Confraternity has grown to 60 decks spread across five continents and many countries including South Africa, United States, Canada, United Kingdom, Japan, Australia, and across Europe.

On some of the achievements of the association in its 70 years of existence, he has this to say: “In the 70 years of our existence, we have contributed significantly to national development in Nigeria by words and deeds. It was our organisation in 1986 through a painstaking investigation wholly undertaken by our members that uncovered the pervasive corruption that had bedeviled operations at the Lagos/Ibadan expressway tollgate. One of the recommendations of that investigation was the privatisation of the toll gates but this was not implemented until many years later.”
Owoaje recalled with pride the involvement of the Pyrates Confraternity in building the Federal Road Safety Corps(FRSC) with dedicated and committed pioneer staff.

“In 1988 when the Federal Government established the Federal Road Safety Corps (FRSC) patterned after the noble example of the Oyo State Road Safety Corps, and appointed Prof Wole Soyinka as the Corps Marshall, our members for love of country, selflessly offered themselves as the fulcrum upon which the organisation was forged. They laid a veritable foundation for discipline, firmness, integrity and an enviable commitment to humanitarian service turning it into a formidable paramilitary agency. Indeed Nigerians would attest to the fact that the FRSC in its heyday was devoid of the corruption and the underhand shenanigans associated with its sister agencies. The FRSC of those days drastically brought down the level of carnage on our roads and highways, and instilled attitudinal change in motorists”.

He also touched on the contribution of Pyrates Confraternity to the restoration of democracy and hinted its story would be documented in a book on the history of the association. “The story for the struggle of democracy in Nigeria will be incomplete without recognising the patriotic contributions of the Pyrates Confraternity towards the restoration of democratic governance. Though a major part of that story remains as yet untold, our members in Nigeria and in the United Kingdom provided support in all ramifications for pro-democracy movements. We were at the fore-front of the struggle to end dictatorship in Nigeria and some of our members had to seek refuge outside the country to escape from the agents of the military junta. Many still bear the psychological and physical scars of that unforgettable episode of unbridled state-sponsored terror in Nigeria.”
While commenting on the global applause, Pyrates Confraternity received from the United Nations over its efforts in drawing the global attention to the plight of the people of Darfur in partnership with Aegis Trust and the commendation from Mayor Ron V. Dellums of the City of Oakland, State of California for contributions made to the society, he said 50 free medical missions have held since 2010 for poor and vulnerable beneficiaries in rural communities in Nigeria. Owoaje further stated that nine editions of NAS Red Balls have been held since 2011 to raise funds in support of the NAS Street Children project and humanitarian endeavours to rekindle hope in humanity. Speaking on the deployment of intellectual power by the organisation, he said the various intellectual platforms have provided the opportunity to mobilise Nigerians in support of a just society.

“As an organisation that prides itself in intellectual prowess, we have used our intellectual platforms namely, Wole Soyinka Lecture Series, Ralph Opara Memorial Lecture and Wole Soyinka Digital Town Hall to advance the much needed advocacy for good governance, economic development, transparency and accountability, justice, electoral reforms and democratic progress on behalf of Nigerians. These intellectual platforms have attracted world leaders, academics, human rights activists and captains of industry and other resource persons in our bid to galvanise Nigerians to continue pushing for a better country.”

Owoaje who pointed out that Pyrates Confraternity through ‘Our Votes Count’ and Citizens Summit’  has supported accountability through encouraging citizens’ participation in elections and governance by promoting the power of the ballot, and the attendant responsibility of holding elected officials accountable, expressed determination to demand for a credible elections in 2023. “The unveiling of the 70th anniversary of the logo /theme officially kicks off our celebration which will run for the next couple of months. Many activities have been lined up to showcase the nobility of our organisation, its enduring ethos and our continued quest to create a just society in Nigeria.

“As we celebrate, we shall also use the period, especially as we inch closer to the 2023 elections to continue our push for a just society where no one would be a victim of colour, gender, or creed. We shall through our celebrations join Nigerians to demand for free, fair and credible elections in 2023. This would be the most fitting climax of the celebration of our 70th anniversary.”

Thank you for joining us today for the event. Please read and download the report here. NAS Report on the State of...

70th Anniversary and A Weekend of Service to Humanity

70th Anniversary and A Weekend of Service to Humanity: Commemorating the Founding Principles of the Pyrates...

Women and Girls, and The Vice-Like Grip of Violence

Since 1981 when the 25th of November every year was selected by women's rights proponents as a day to mark the battle...