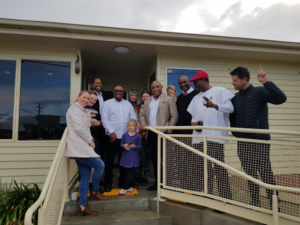 Seadogs at Neighbourhood house in Tasmania 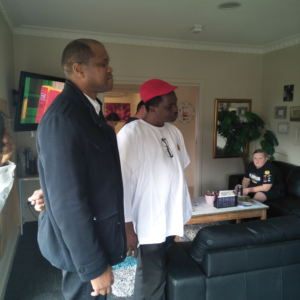 NAS Hiroshima Deck visited the George Town Neighbourhood house on Saturday July7th 2018, as part of their activities during a work and charity visit to Tasmania. The association, led by the then Cap’n, Dr Charles Meribole, was received on arrival by the Director of the George Town Neighbourhood Houses, Ms Simone Lowe, alongside other staff and volunteers of the centre.

Conducting Seadogs round the centre, Ms Lowe explained the programs and activities of the House which include provision of essential food to the poor in the community through a program called ‘second bite’, provision of legal aid and services to members of the community who may not ordinarily afford it, helping the poor and vulnerable in the community to apply for and access housing approval through government schemes, organizing holiday programs for youth and kids among other programs.

Ms Lowe informed seadogs that the Neighbourhood House attends to over 500 clients every week and the feedback from the community has been great.

She highlighted the challenges that face the House which include funding, increasing number of poor and vulnerable persons which stretches the scarce resources available and the need to get more volunteers.

In his reaction on behalf of Seadogs, Dr Meribole thanked Ms Lowe and her team for the warm reception accorded us. He praised the Neighbourhood House for all their efforts toward ensuring a better society which is in line with the principles of National Association of Seadogs. Dr Meribole also announced the official presence of NAS in Australia through our formal registration and assured Ms Lowe of our support whenever they need it. He went ahead to make a monetary donation of 500 Australian Dollars to the Neighbourhood House on behalf of the association.

Seadogs and members of staff of the Home had photo sessions and Ms Lowe answered various questions raised by Seadogs during the visit. Ms. Lowe thanked the association for the donation and assured that the money will be put into good use for the benefit of the community.

Nigeria's Education Sector At a Crossroads - The Time to Act is Now! It is on a very sombre note that Nigeria joins...