NDLEA’s spokesman, Mr Femi Babafemi, at a press conference, in blow-by-blow sordid and graphic details outlined Kyari’s direct involvement and criminal indictment, and declared him wanted. Kyari and four other suspects from the Nigeria Police Force connected to the drug scandal have since been arrested and subsequently handed over to the NDLEA for interrogation and possible prosecution.

We are not oblivious of the fact that Kyari and members of his team currently in NDLEA custody remain innocent until pronounced guilty by a law court. However we are extremely perturbed about the circumstances surrounding the involvement of the senior police officer in this unfolding drug scandal and the colossal negative ramification therein.

We recall that following Kyari’s criminal indictment by the Federal Bureau of Investigation (FBI) of the United States of America as part of investigations into the $1.1 million advance fee fraud involving Instagram celebrity, Ramon Abbas aka Hushpuppi,   the Police Service Commission (PSC) in August 2021 suspended Kyari from the Police Force and as head of IRT,   and replaced him with DCP Tunji Disu.  A Police Special Investigation Panel investigated  Kyari’s FBI indictment. The report of the panel was reviewed by the Nigeria Police Force Disciplinary Committee and shockingly in spite of noticeable serious infractions it merely recommended his demotion from the rank of Deputy Commissioner of Police to Assistant Commissioner of Police having found him to have “fraternised with fraudsters and also violated the social media policies of the Nigeria Police Force by responding to FBI’s indictment on his Facebook page without recourse to laid down procedures”.

However, observations by the Attorney-General of the Federation and Minister of Justice, Mr. Abubakar Malami in the report stated that there exists a prima facie case against  Kyari. Similarly the Police Service Commission (PSC) dissatisfied with the watery report submitted by the IGP, gave him a two-week ultimatum for another panel to investigate Kyari. It was in the midst of these endless shenanigans by the Nigeria Police that NDLEA informed a bewildered nation about Kyari’s alleged involvement as a principal actor in an international drug ring.

In the light of this latest development, a number of curious observations beg for clarity and answers. How was Abba Kyari, supposedly on suspension since August last year, still able to exercise operational control over the IGP’s IRT team to intercept and arrest two drug couriers at Akanu Ibiam International Airport, Enugu? Where was the new head of IRT, Mr Disu when it was Kyari that was issuing official directives to his men? Who was the senior officer at the Force Headquarters that received the report of the arrest of the two couriers by the IRT team ostensibly being led by Kyari?  At what point was the Nigeria Police planning to tell Nigerians about its findings on its officer’s alleged involvement in “official corruption which compromised ethical standards in dealings with the suspects and exhibits recovered”?

Regardless of answers to these questions which should be provided by the IGP himself, the inconvertible fact is that the Kyari drug scandal has once again exposed the grave dysfunction and rot that permeates Nigeria’s security system. A system that empowers and elevates rogues to stardom, shields criminality, breeds incompetence and official corruption is completely unacceptable and untenable.  A system that affords state officials and custodians of the law the opportunity to compromise state institutions with impunity and accelerate the collapse of governance is one that must be repudiated by all right thinking citizens. It is not difficult to understand why Nigeria’s image has continued to attract odium in the areas of transparency and anti-corruption.

Besides, the unsavoury image of the Nigeria Police has been further battered by this Kyari cocaine saga. The desperate attempt to cover-up Kyari via a shoddy probe by the investigating panel exposes the deep-seated state of anomie in the Nigeria Police. At the heart of this inquisition is the IGP who could hardly give a cold shoulder for wrong behaviour but hobnobbing with a suspended officer under investigation over allegations of international fraud to the disturbing extent that the latter was a conspicuous personality among guests at his son’s wedding recently. The IGP has shown that he is undeserving to be trusted to clamp down on crime and criminality even among the rank and file over which he superintends.

President Muhammadu Buhari must take responsibility for this mess. His laid-back approach to the issues of corruption and impunity has emboldened state officials and law enforcement agents to elevate official corruption and impunity to state craft. He should immediately ensure that all the clogs that could impede the swift and efficacious dispensation of justice in this particular case are promptly dismantled. All indicted dramatis personae (in official and unofficial capacities) in this unfolding show of shame must be made subject to the tenets of the rule of law. The President should as a matter of urgency ensure that at his instance, a high powered independent and transparent probe reveal the extent of involvement of state actors, and those found culpable and still serving should be dismissed and prosecuted.

More importantly, the President has a moral and legal duty to allay the fears of many Nigerians who view this Kyari drug saga as an orchestrated ploy to delay his extradition to the United States to face money laundering charges. Nigerians, wearied by a litany of pernicious lies and propaganda by the current administration, and also having watched state officials habitually perpetrate injurious acts without consequences, can hardly be blamed for lack of trust.

The Kyari saga exposes Nigeria to further global scrutiny of unprecedented dimensions, and President Buhari has another opportunity to salvage the continually fading image of Nigeria and that of his administration by ensuring that the wheel of justice is not compromised at any stage. Nigerians are watching.

70th Anniversary and A Weekend of Service to Humanity

70th Anniversary and A Weekend of Service to Humanity: Commemorating the Founding Principles of the Pyrates...

Women and Girls, and The Vice-Like Grip of Violence

Since 1981 when the 25th of November every year was selected by women's rights proponents as a day to mark the battle... 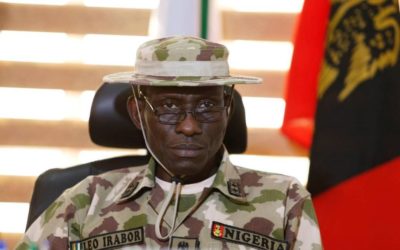 The Chief of Defence Staff, General Lucky Irabor’s recent public defence of the burning of a vessel, MT Deino,...