National Association of Seadogs held a worldwide march on Saturday, 29 September 2012 to express its strong displeasure over the federal government’s inability to appeal against the judgment of the International Court of Justice, (ICJ) on 10 October 2002, which ceded the oil-rich Bakassi Peninsula to the Republic of Cameroon. 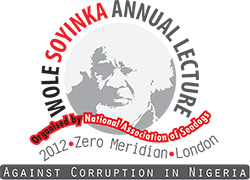 The Prof Wole Soyinka Lecture is an annual series in recognition of the humanitarian works of Prof. Wole Soyinka (Nobel Laureate), one of the founders of National Association of Seadogs (NAS). Since its inception, lectures have been held in three continents around the world. The series provides a forum for intellects of like minds, to discuss prevailing socioeconomic issues within Nigeria and Africa in general.

NAS monitored the 2011 General Elections in Nigeria as an accredited group by INEC.

Here are some of our members during the exercise.

NAS We Care 2011 Luncheon in Pictures

NAS We Care, the American Charity arm of National Association of Seadogs organised a launcheon to raise funds for its projects.

Here are some of the guests at the event.

Topic: The Thing Caught in Nte's Trap: the Mega-Crisis of Education in Our Country and Our Continent

This event is the 14th lecture in the series which will also mark the 25th anniversary of Professor Wole Soyinka winning the first African Nobel Prize in literature.

Theme: Reclaiming OUR LOST TREASURES - Past and Future

The Owerri Chapter paid a visit to the Red Cross Motherless Babies Home to provide counselling, gifts for the children as well as a donation  to the home.

Picture shows members of the chapter with some of the children and Managers of the home.

Kaduna Chapter Embarks on Community Cause

A visit to the City of Refuge Motherless Babies Home by the  NAS International, Kaduna Chapter.

Picture shows members of the zone with the children and Managers of the home.

NAS International, Enugu Chapter, in October 2007, gave free eye tests to members of the Nigeria Police Force in Enugu. At the end of the exercise, free reading glasses were given to participants as required.

Cross section of police officers waiting to be screened.

Cross section of police officers waiting to be screened.

The optometrist checking the blood pressure of an officer while the biochemist, Mon Charles Egbo, records the readings.

The Optometrist addressing the officers and other ranks before the excercise.

NAS International, Warri Chapter, organised the 24th Annual Umalokun Memorial Lecture in memory of 6 members of the organisation that were brutally murdered by officers of The Nigeria Police on December 29, 2007. The lecture titled "Extra Judicial Killings - What Hope for the Common Man" was delivered by Barr.(Lady) Kate Mudiaga-Erhueh, Special Adviser (Abuja) to the Delta State Governor.

The Houston Chapter took part in the Season2Give Toy and Gift Drive project with the aim of giving back to the community, by providing children living in homeless shelters, foster care and other local community centers with toys or gifts to brighten up their holiday season. The chapter purchased 200 units of toys for distribution to children of the homeless and less fortunate in the southwest area of Houston.

Picture shows the representative of Season2Give accepting the donations from the members of the chapter.

NAS International, Abuja Chapter visited the Police Area Command, Kubwa, Abuja to present some items to aid the police in their duties on the 16th December, 2006. Among the items donated are reflective vests as worn in the photograph.

NAS International, working with Save Darfur Coalition organised a number of events around the world to further the demonstration of a global commitment to protecting the people of Darfur on September 17, 2006.

The Nigerian Child As An Endangered Being (Akwa Ibom)

NAS International, Akwa Ibom State Chapter hosted a seminar titled THE NIGERIAN CHILD AS AN ENDANGERED BEING. The seminar highlighted how the Political, Social And Economic Realities in Nigeria have combined to deprive Nigerian Children of a viable and worthwhile future hence endangering their existence.

The Port Harcourt Chapter of NAS International embarked on charity visit to the motherless babies' home where they offered gifts and free medical services.

This seminar, titled The Prospects of Democracy in Nigeria: The Role of The Nigeria Diaspora, was organized by the Atlanta, USA Chapter of NAS International to create a forum for the Nigerian Diaspora living in the Atlanta area an opportunity to discuss and generate ideas on how to contribute positively towards good governance in Nigeria. Guest speakers at the event were Rev. (Mrs.) Adedumola Carter, Mrs. Edna Udobong, Mr. Dozie Ekedifie Jr. with the NAS Capoon (Dr. Odili Ojukwu) as Special Guest of Honor.

Free eye examinations were provided for police officers and men in the Awka Command, the Central Police Station and the Police Mobile Force, all in Awka metropolis by the Anambra State Chapter of NAS International. Blood pressure measurements were also taken as well as donation of free drugs.

Warri Chapter embarked on a week long programme from 21st - 26th of July 2003. A visit was made to the St. Anne's Orphanage of the Mother of the Redeemer Catholic Church where cash and food items were donated. The picture here shows another event where awards were presented.

Natl Association of Seadogs NASPC1952 invites you to this Zoom Summit as we seek lasting solutions to the "Awaiting Trial" phenomenon in Niger… https://t.co/Xy8R3GxIQV