Anambra State chapter of the National Association of Sea Dogs (aka) Pyrate confraternity has made donations to the flood victims in the area urging governments in the state and at the national level to be always proactive against future occurrences. 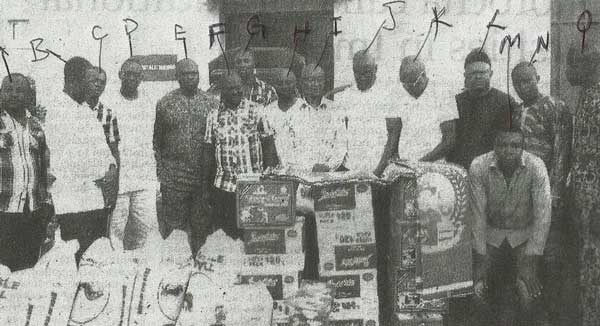 The body which visited the office of National Emergency Management Agency (NEMA) in Anambra State came with wrappers, bags of rice and other food items noted that had it been governments had be proactive the level of destruction would have be greatly reduced.

Speaking with reporters shortly after the donation, the leader of the body in Anambra State, Mr. Chidi Anwadike said: "We have to sympathize with our brothers and sister that were affected by the flood. This is part of the activities of the organization which is charity to the less privileged in our society." Also speaking, the former president of the body, Mr. Chike Anyegbunam and Mr. J.U. Akpaka suggested that "the issue is that we need solution; despite the fact that at the end of the day nothing may be done, nevertheless, things like this should not be allowed to repeat itself."

He continued: "Government should be proactive and work towards ensuring that it does not repeat itself. We also hope that our brothers and sisters would make good use of the items that we have presented to them."

Also the member representing Aguata I State constituency and chairman committee on environment, Mr. Ikem Uzoezie, announced that the South East body of the National Association of Sea Dogs would be meeting to discuss further on what should be done to the flood victims in the area of providing medical assistance and other sundry presentations to the victims.

It would be recalled that the body had paid similar visits to motherless babies homes and carried out free eye treatments to officers and men of the police mobile force 2 command in Awka.

The body which has been involved in all kinds of public assistance known as NAS charity are of the view that every organization no matter how the small or big should impact positively on the lives of Nigeria and the world global society at large recently the body had made its statements on the battle over the ownership of Bakassi peninsula which was earlier given to the republic of Cameroon.

This statement followed a nation wild rally held in every state chapter including Abuja Capital territory According to the Awka Chapter President Mr. Chidi Anwadike the essence of this rally is make our impact felt in the country. We are of the view that government should do all within its ability to review what belongs to us an we Anambra had our own rally.

Also in a statement from Chief Ogbuehi Dike, the National President of NAS the body noted that The National Association of Seadogs (Pyrates Confraternity), Abuja chapter would hold a peaceful demonstration to raise awareness of the current plight of the indigenous people of Bakassi, the Nigeria enclave that was ceded to the Government of Cameroun following the October 10, 2002 judgment of the international court of justice (ICJ).

"As an organization, we have been involved in the fight for the betterment of the human society through activities, including but not limited to the struggle for the emancipation of the people of Darfur in Western Sudan from suffering and persecution as a result of the lingering war there, via the 'Save Darfur Initiative' in 2007 and 2008. We believe that as an indigenous organization, we need to bring to the fore the current plight of our Bakassi brothers," Dike said.