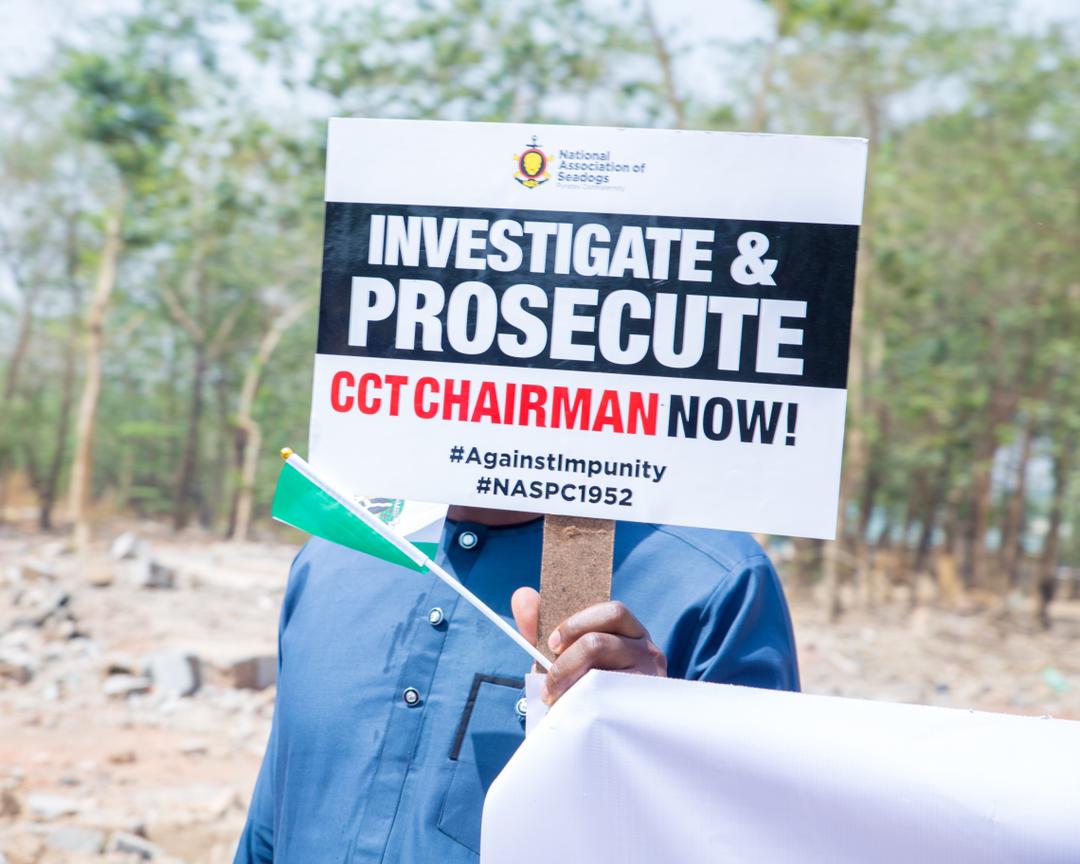 Justice may be on the horizon for Mr Clement Sagwak, the man assaulted in Abuja by the Chairman of the CCT, Mr Danladi Umar. The Senate Committee on Ethics, Privileges and Public Petitions has given Umar two weeks to defend a petition against him.
Recall that members of the Pyrates Confraternity had on Tuesday April 6 protested in front of the CCT office building in Abuja demanding the removal of Danladi Umar who allegedly assaulted Sagwak.

In a press statement signed by the NAS Capoon, Mr Abiola Owoaje, he said "Mr Umar has clearly demonstrated an inability to uphold the high standards, in personal and public conduct, expected of judicial officers, which his office by the requirement of the law demand of others." The summons by the Senate, reported in the Vanguard publication of 4th May 2021, is a step in the right direction and we will be monitoring the situation to ensure justice is done.

See images from the Pyrates march to the CCT Office in Abuja (Click Image to enlarge):

Read The Vanguard Publication below:

The Senate Committee on Ethics, Privileges and Public Petitions, on Tuesday, gave the Chairman, Code of Conduct Tribunal (CCT) Mr Danladi Umar, two weeks to defend a petition against him

The Chairman of the Committee, Sen. Ayo Akinyelure, issued the directive when Umar appeared before the committee on Tuesday in Abuja to answer allegations of assault by a security guard, Mr Clement Sagwak. Sagwak, a security guard had through his Counsel, Timzing Ramnap, petitioned the Senate, accusing Umar of alleged assault. NAN reports that Sagwak, 22, and an employee of Jul Reliable Guards Services Limited, told the Senate in his petition that he was assaulted by Umar and a policeman attached to him after he informed him (Umar) that his car was not properly parked. He said the CCT boss slapped him several times and forced him to kneel down in the presence of people while performing his lawful duties. Senator representing Plateau North, Sen. Istifanus Gyang, laid the petition before the Senate on April 29.

Umar, who appeared before the committee asked the panel to give him one week to study the detailed petition which was served on him at the session to enable him respond appropriately. Chairman of the Committee, Akinyelure said even though the Senate would proceed on a two-week break on Thursday, the Committee was prepared to reconvene during the break to hear the respondent, Umar. The News Agency of Nigeria (NAN) reports that a viral five-minute video had captured Umar and the guard having an altercation at the Banex Plaza, in Abuja. Umar had in a statement denied the allegation and claimed that contrary to the content of a circulated video, he was a victim of an assault by people who chanted “secessionist and sectional slogans”.