Convoys, sirens and the tragedy of recklessness

Festus Iyayi was, by every account, a truly exceptional Nigerian. University lecturer and activist, he was, between 1986 to 1988, the leader of the labour union entity known as the Academic Staff Union of Universities (ASUU), the umbrella organization responsible for the activities of academic staff unions across universities in Nigeria. 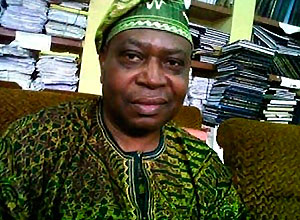 In 1987, as its president, ASUU confronted the military leadership at the time, advocating critical improvements of working and education conditions for the staff and students population alike. As its influence grew and with typical military fastidiousness, ASUU was banned by the government at the time. Its leadership, starting with Iyayi, were arrested, detained and tortured. His employment with the University of Benin was terminated. He experienced – and survived – this extremely harsh and inhuman treatment, grew in stature and principle whilst achieving, albeit in part, some of the objectives that led to the original standoff in the first place. With the passage of time, he ceded the front-runners role to others but remained a formidable encapsulation of wisdom for ASUU. For 5 months now, ASUU has embarked on a strike, citing some of the same issues for which Iyayi so valiantly put himself in the forefront. With the stagnation of efforts by government to resolve the crisis, yet another negotiation exercise was arranged to take place. Iyayi’s considerable experience and voice was called upon. On Tuesday, 12 November 2013, on a journey by road to Kano to attend an ASUU National Executive Council meeting, Iyayi and three others were involved in a fatal motor accident in which, most profoundly, he lost his life. That Nigeria, the Academic Staff Community, Edo State and most importantly, his family have lost a leader of immense proportions is unquestionable and the nation’s deepest sympathies are with them at this extremely trying time.

But what is so significantly galling is that having survived the most indescribable physical abuse for a cause for which he stood so heroically tall, he was to be claimed by a quite needless, entirely avoidable and hugely unnecessary accident. The accident occurred when the vehicle he was travelling in was hit by another from the convoy of the Kogi State Governor driven, it appears, with such capriciousness that its impact caused the injuries from which he sadly never recovered.

Convoy related accidents are not new in Nigeria. Incidents of very serious and fatal accidents occurring across the country have continued to occupy news headlines and occur with shocking regularity. The key features of these accidents are largely two fold. First, these vehicles are driven at such speed – generally by drivers who, in real terms, are so ill-prepared for high speed driving of this nature that masterly control of the vehicles is generally difficult – and with such disregard for other road users that accidents are often prevented largely by the other drivers taking evasive action. The second reason, to which this article with return in some depth, is that the proliferation of “convoy driving” from an obscenely inordinate number of “convoy users” makes it inevitable that high volumes of accidents would necessarily occur.

Convoy travel – for want of a better description – is an inherited luxury. Essentially conceived to aid easier travel on congested roads, the purpose was to provide faster travel to destinations for emergencies and urgent attendance for matters of state attention. In doing this, the security of those being transported, itself an important consideration depending on the passenger, was an additional benefit as speedier travel would inevitably provide a security bonus for the “Very Important Passenger”. This practice is common across the world. But it is important to look at the current position for some of the world’s most advanced nations from where these practices have been culled.

In the United Kingdom, sirens and flashing lights are described as “blues and twos”. Almost completely utilized by the emergency services, like the Fire, Ambulance and law enforcement services, its use is chiefly too obtain faster access to respond to an incident of the type covered by the emergency service. The use of blue flashing lights is regulated by the Road Vehicles Lighting Regulations 1989, and sirens by the Road Vehicles Construction and Use Regulations 1986, both as amended in minor respects by various other pieces of legislation subsequently. Vehicles used for these purposes may have exemptions from some road traffic regulations whilst responding to an emergency. These exemptions range from exceeding the statutory speed limit (police, fire and ambulance purposes only; and special forces purposes only for national security emergencies where the driver is trained or is being trained in high-speed driving); driving in a bus lane; stopping on zigzag lines; parking in restricted areas, using audible warnings outside permitted hours. However, the guiding and overriding principle is that merely being authorised to use blue lights and sirens does not of itself grant exemptions from road traffic law. In other words, despite the exemptions, compliance with road traffic laws including driving with due care and attention to other road users remain paramount. As for official usage, this is extremely restricted. Prior to the premiership of David Cameron, only the Prime Minister and a very small selection of government officials used flashing lights and travelled, convoy style. Tony Blair, the last of the prime ministers who did so travelled in a state official car, with no more than a small number of other vehicles and highly trained police motorcycle outriders. Without motorcycle support to keep travelling routes clear, the reasoning is that the inevitable occurrence of London traffic and traffic lights renders the passenger a static, vulnerable security target. Post 9/11, the security concerns around the person of the British Prime Minister has heightened tenfold, justifiably sustaining the reason for this high level of security during vehicular movement. This movement is often quietly done, with only the flashing lights giving any indication of such top-level movement. Despite this quite justifiable premise, David Cameron has now dispensed with the motorcycle outriders and scaled down the size of his motorcade to almost invisible proportions. He has been fiercely criticized for this decision particularly because, at a fundamental level, the effective protection of the prime minister is necessary, it has been argued, for the secure function of British democracy. He has stuck to this decision, still at no personal cost to his safety. Imagine then what this has done to those other “entitled” public officials. Such “convoy” movement for private citizens whatever their status and wealth, is unknown.

At the other end of the scale, in the United States, the vehicular movement of the President is common knowledge so much that it has actually become a tourist attraction. The motorcade for the President of the United States comprises twenty to thirty vehicles. In addition to the president, the motorcade may carry his spouse, members of the press, security, White House officials, and VIP guests. The major members travel in armoured vehicles, typically specially configured limousines. The motorcade contains several armored vehicles, a USSS Electronic Countermeasures Suburban, a counter-assault team, and Secret Service agents. When called for, a hazardous materials team precedes the motorcade on alert for potential hazards. A police presence precedes the beginning of the presidential motorcade. These cars and motorcycles usually drive ahead to clear the way and block traffic. The motorcade for the president is made up of two parts, the first being the "secure package". In the event of an emergency, the secure package separates from the rest of the group. It includes two limousines heavily guarded by local law enforcement and Secret Service, with all cars driven by professional drivers. The second part is made up of vans that transport White House staff members and selected members of the press. In the rear is the WHCA Roadrunner communications van – which provides the primary communications path via satellite, allowing bi-directional voice, data and streaming video – an ambulance, and additional police vehicles. The US President’s movement is one of the most astute security operations the world has seen. The movement is swift, precise and occurs with minimum disruption to other road users despite the size of that motorcade. The reasons are also plainly obvious. The Vice President has a much smaller motorcade. Sirens, flashing lights and convoys have very restricted usage. Critically, the number of public officials is so small that this is almost insignificant. The moral from both comparisons is that its use is confined to a small selection of individuals; its implementation seamless and its occurrence, however often, resulting in only the slightest interference with other road users. Needless to state, there is almost no risk to the lives of those on the road at the same time.

There are serious problems with convoy traffic, sirens and flashing lights in Nigeria. First, there is an inordinately large number of users. Without exaggeration, this number must run into several thousands, countrywide. The vast majority are public servants starting at the very top. There is very limited control of the process by which approval is given; who or at what level of public service this ridiculous benefit is afforded. Then there is private individual usage. In all cases, speed of travel and security are cited for its usage. But this also presents the very reason for its wanton abuse. The fact that it is extended to private individuals is plainly outrageous and that this is usually accompanied by corresponding deployment of law enforcement officers from the Police Force makes this process even more bewildering. The incredulity does not end there. The vehicles utilised are often high powered, sometimes customized vehicles for which their drivers receive little or no training. These vehicles are driven, therefore, by poorly trained drivers at astonishing speeds over roads and surfaces that can be treacherous and at great risk to motorists and pedestrians. It is this aspect, namely the speedy and incompetent driving, more than the actual convoys, sirens and lights that accounts for the majority of the accidents and fatalities.

But by a long margin, the most culpable in this charade of recklessness are the “Very Important Passengers”. These individuals represent the very reason that these convoys and high speed driving even exist, in the first place. Between 2005 and 2013, no less that 10 governors and their convoys have been involved in quite serious accidents, some of them personally affected and some resulting in fatalities. Several others outside this extremely high level of governance make up this ugly and undignified statistic. It is incomprehensible that this type of road behaviour is condoned or accepted with the kind of crass abandon that has been the case. Its continuance connotes recklessness and institutional extravagance at its highest by some of the very people who should lead the responsibility for eradicating this syndrome. That the passengers do not feel physically endangered by such high speed driving poses confounding questions about their sanity. Convoy movement – along with its excesses - is deplorable and to be abhorred, the very posture taken, so admirably, by Babatunde Fashola, the Lagos State Governor. He – and Lagos State – have followed this deprecation by the passage, in 2012 of the Lagos State Road Traffic Law which seeks to regulate both the usage of sirens, convoys and the conduct of persons driving on Lagos roads in this respect. It is a start but its theme is so commendable it should be borrowed by the rest of the nation.

Iyayi’s tragic death, as with many others that have occurred in this way is so regrettable it should offend the sensibilities of every road using Nigerian. It should not be ignored in typical Nigerian fashion. This lamentable tragedy should serve as a catalyst of re-orientation for the many who are, could and would be affected by this most deplorable practice. Enough is Enough!!