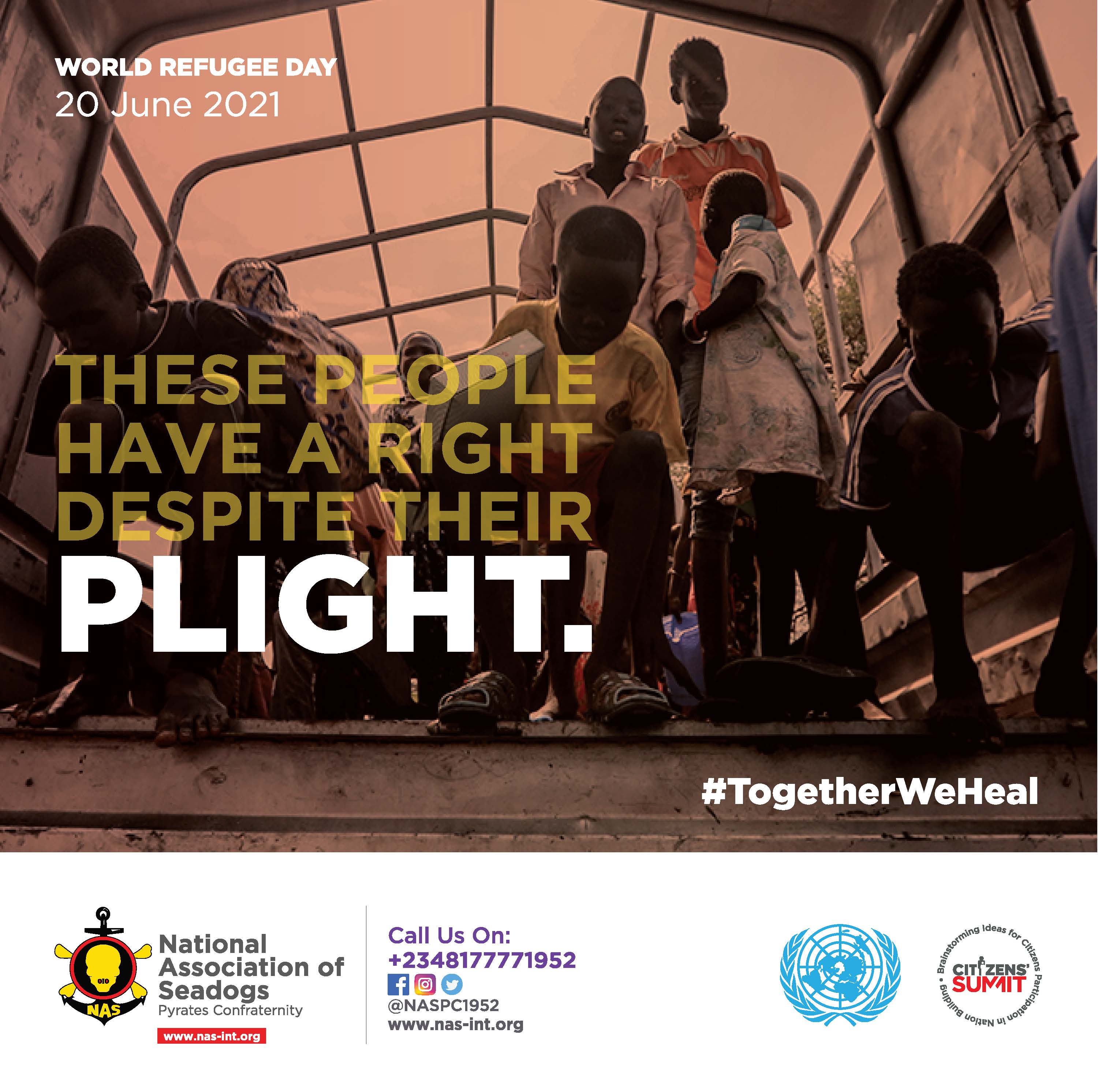 The National Association of Seadogs (Pyrates Confraternity) joins the rest of the world in marking this year's World Refugee Day.  It is a day of poignant reminder of the travails of refugees, and a celebration of their resilience. It is also a day on which the worsening plight of refugees is given more strident amplification by all and sundry. At a period when many parts of the world are facing unprecedented levels of conflict, displacement and death, this year's commemoration calls for even greater sobriety, reflection, empathy, and public awareness than ever before.

Since the year 2000 when the United Nations announced it as a global event to mark the 50th anniversary of the 1951 Convention Relating to the Status of Refugees, World Refugee Day has remained one of the most important days in the world's calendar; a day on which light is shone more brightly on the rights, plight, and aspirations of refugees, and a day for mustering the resources and political will needed to alleviate their sufferings. It goes without saying that the living conditions of people fleeing from conflict, persecution, and natural disasters have worsened in the last few years. A cataclysmic downturn in the global economy, exacerbation of wars (including terrorism), climate change and the current Coronavirus pandemic have combined to further aggravate the precarious situation in which increasing numbers of refugees have found themselves.

The theme for this year's World Refugee Day - “Together We Heal, Learn and Shine” - presents a massive opportunity for displaced persons the world over to be seen, heard, and appreciated within the communities in which they struggle daily to eke out a manageable existence. Forcibly leaving one's home and fleeing with minimal possessions in search of safety and succour is one of life's most traumatic expeditions. This makes refugees some of the most vulnerable people in the world, with habitual infliction of extreme weather, hunger, despair, trauma, disease, and personal loss. The theme, therefore, seeks to stimulate active concern from governments, agencies, organisations, and private individuals to the continual need for support and aid.

The National Association of Seadogs is genuinely concerned about the deteriorating fate of refugees in every clime, particularly those internally displaced in Nigeria, and joins all well-meaning individuals and groups in seeking a more concerted global resolve to alleviate their fears and pain. We enjoin host countries and their citizens to show more empathy in their duty of care. We are particularly worried about the current and potential refugee crises that continue to plague the African continent because of the widespread armed insurgency sweeping across the Sahel. The situation has indeed become unbearable as hundreds of thousands of individuals flee from threatening violence to areas hardly equipped to assuage their most urgent needs.

African countries, and the rest of the world must rise to this urgent challenge and ensure that refugees are able to heal and shine forth by creating the enabling environments that will promote the unleashing of their potential with the aim of being resettled back in their homelands or within their host communities. Nothing else will do.