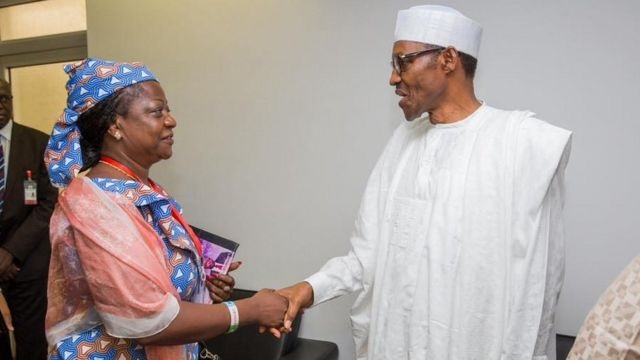 The resurfacing of the name of an aide to President Muhammadu Buhari, Ms Lauretta Onochie before the Nigerian Senate; for consideration as a National Commissioner of the Independent National Electoral Commission (INEC) representing Delta State, is an affront on democracy.

Her presentation to the Senate (eight months after the initial ill-advised recommendation by President Muhammadu Buhari was roundly met with public opprobrium and rejected) is a blatant assault on all known norms and ethics of democracy; especially with the necessity to ensure free, fair and transparent elections.

Ms. Onochie’s appointment violates Section 14(2a) of the Third Schedule of the 1999 Constitution as amended which states that, “A member of the commission shall be non-partisan and a person of unquestionable integrity.”

Therefore, that a card-carrying member of the ruling party, and a serving presidential appointee, who has gained widespread notoriety for her acerbic and brazen partisanship is being proposed to become a commissioner with the country's electoral umpire, undermines INEC as a democratic institution and is an assault on the concept of democracy.

The raison d'etre of democracy, and which has made it the most ideal mode of governance across the globe for centuries, rests squarely on the fundamental precept that political leaders at all levels should be chosen in a free and fair manner; devoid of coercion under any guise, through a transparent electoral process. This is the principle that has birthed the democracies that we all envy from afar, and which we strive assiduously to replicate within Nigeria's democratic space.

Any attempt, therefore, to thwart this ideal, in the unscrupulous manner that Ms. Onochie's appointment represents, must be repudiated by all well-meaning citizens, especially representatives of the people at the Nigerian Senate.

It is unfathomable that President Muhammadu Buhari cannot find any other qualified, non-partisan citizen from Ms. Onochie's state of origin to occupy the INEC seat. His worrisome insistence on her candidacy, in the face of strident opposition by all and sundry, calls to question his repeated verbal commitment, of ensuring that future elections will be an improvement on preceding ones.

We urge the National Assembly to live up to its sworn constitutional mandate as the custodian of the people's collective aspirations, and ensure that this attempt to taint the electoral system with the appointment of a proven partisan person does not see the light of day.

There is no law that says that every nomination from the executive should be accepted. In recent times, the leadership of the Nigerian Senate has presented the image of a willing tool in the hands of the executive, to foist incompetent and unqualified people, including persons with questionable characters on Nigerians as public officers, due to scant regard for rigour in its screening.

Now is the time for it to redeem itself. It is the least that the members of the hallowed red chambers owe their constituents, to save democracy. It will redound to their honour to think and act for the country first.