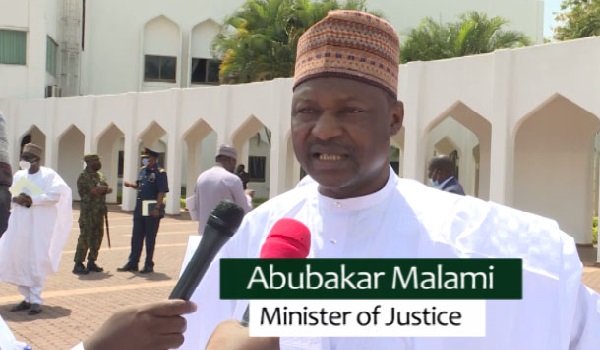 We listened with consternation, like many well-meaning Nigerians, to the views expressed by the Attorney-General and Minister of Justice, Mr Abubakar Malami, SAN, on the Channels TV programme, Politics Today, aired on Wednesday May 20th, 2021.

Mr Malami had criticized the imminent ban on cattle open grazing in southern Nigeria, included in the communiqué issued after a meeting of 17 southern governors, due to deaths, violence, destructions and plain criminal breaches that had accompanied this ancient system of animal husbandry.

Mr. Malami had drawn a false equivalence between cattle herding in southern Nigeria, and selling of spare parts in northern Nigeria. The logical blunder in this false comparison is worsened by his obvious pandering to bigotry.

It is disheartening that Mr. Malami, the Chief Law Officer, would make utterances capable of inciting Nigerians against one another, whilst making an incompetent argument on a point of law. His comparison of killer herdsmen to dealers of spare parts is irresponsible and shameful.

The selling of spare parts is clearly a legitimate business that does not habitually involve criminal trespass on other citizens' properties and the frequent threat and actuality of lethal violence.

This facile comparison compels us to remind Mr. Malami of the communal strife, mass murder, and massive destruction of farmlands and property, which have been the direct consequence of this archaic practice of open cattle grazing sans respect for property rights.

As a reminder, Amnesty International had reported that more than 3,600 Nigerians have been killed since 2016 when open grazing transmogrified into criminal trespass and premeditated programmes of murderous barbarity.

In addition, thousands have been displaced from their ancestral lands and homes by these violent sprees that have conveniently escaped the attention of our Chief Law Officer.

Section 41 of the Nigerian constitution enshrines the freedom of movement of humans but this cannot be translated into the unrestrained right to roam and trespass  by animals and their herders, or their criminal proxies.

It is noteworthy to point out that as far back as April 2018, a three-man subcommittee on farmers/herders clashes, of the National Economic Council (NEC) headed by Governor Dave Umahi, had recommended the ban on open grazing. The NEC had accepted the recommendation but is yet to be enforced.

As the Chief Law Officer of the country with such a sectarian mindset, Mr. Malami, with his comments, has exposed himself as one of those frustrating the resolution of the farmers/herders crisis. He appears to be an agent of destabilization, who has no place in the Federal Executive Council.

His remarks are a disservice to his position as the Attorney-General, and the profession in which he has attained some prominence, and regrettably, an indication that he is no longer fit for the position he presently occupies.

At a time the unity of this country has been badly shaken; and a period when impunity stalks the land, keeping Mr. Malami as the Attorney-General is a mockery of justice and fairness, and an assault on national cohesion. He should honourably resign his position, or be fired to save the Buhari government from further embarrassment.