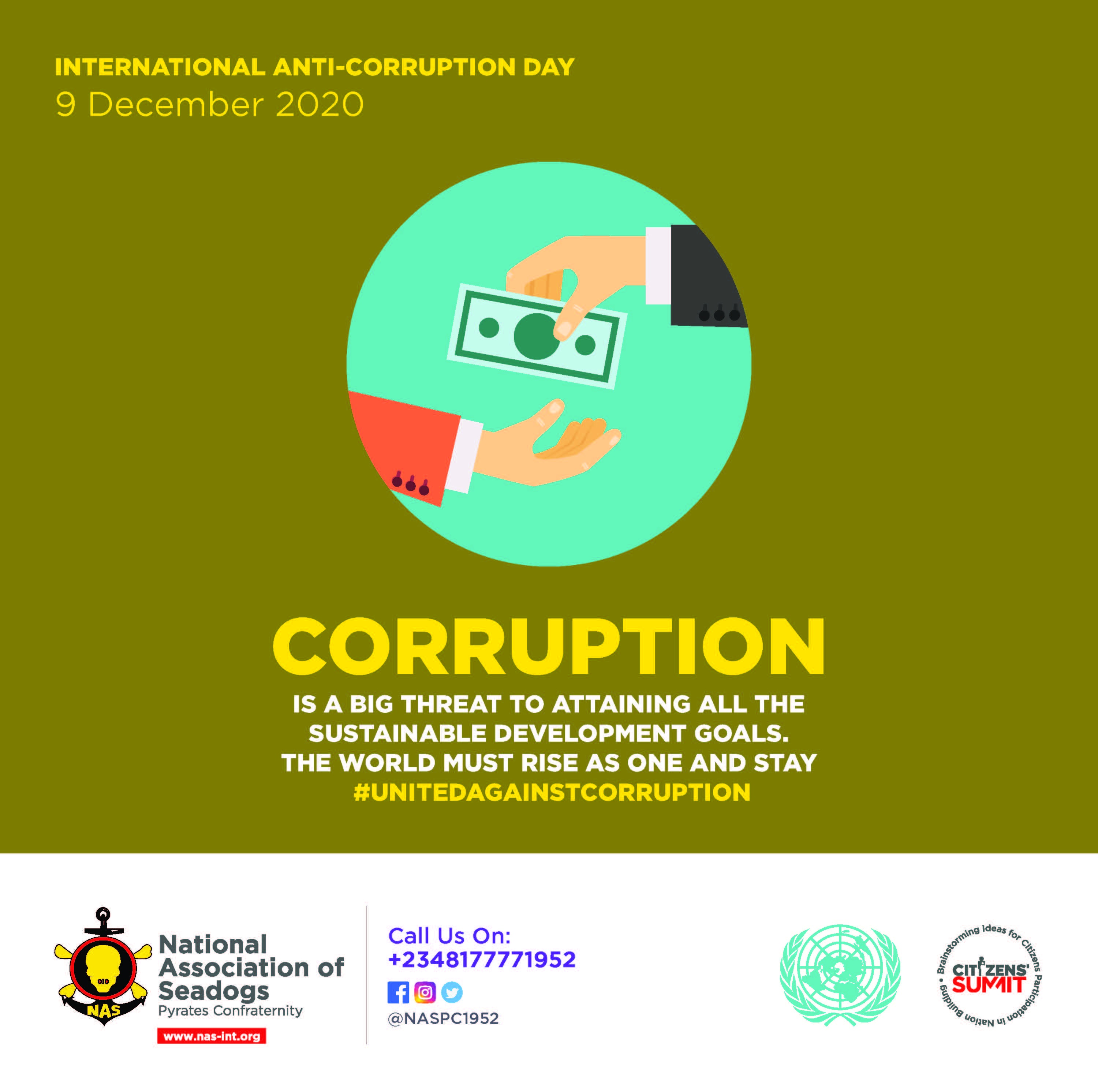 Corruption is often the difference between the flourishing wealth with stability of nations and the crippling poverty with prevalent entropy in others. It has a major impact on the effectiveness or otherwise of institutional frameworks and a sine qua non of the moral and ethical direction of society. Corruption is a major threat to building a better world; one which thrives on meritocracy and guarantees equal access to resources and opportunities, significantly instilling public trust in public institutions and officials.

One of the greatest moments in the history of the United Nations was recorded on the 31st of October 2003 when the General Assembly resolved and adopted the 9th of December every year as the International Anti-corruption Day. It was a courageous and timely move intended to raise awareness about the menace of corruption and to mobilise the political will and resources required to confront it. It is an event that has, over the years, helped in no small way in putting the destabilising phenomenon in the global spotlight.

Corruption is an existential threat to Nigeria and the single most important hurdle between our country and potential greatness.  For instance a non-governmental organisation, the Human Environmental Development Agenda (HEDA), after an intensive global research in collaboration with international partners in 2019, revealed that Nigeria has lost $600 billion dollars to corrupt government officials since 1960.

Sadly, the war against corruption in Nigeria has been viewed with suspicion by the citizenry because of the perception that it is selective, ineffective, and has therefore stumbled on without credibility. Occupying the 144th position out of 180 nations on the Transparency International index of February 2019, Nigeria still wallows in the morass among the world's most corrupt nations. The consensus opinion is that the battle must move beyond the tokenism of occasional recovery of funds and often theatrical convictions to the hard task of tackling the underlying structural defects, institutional failure, mediocre political leadership and other sundry predisposing factors.

The theme for this year's International Anti-corruption Day, “Recover With Integrity: #UnitedAgainstCorruption”, is a veritable clarion call in the light of the current Coronavirus pandemic, and the devastating deprivation and crumbling systems it is leaving in its wake. Unfortunately, times of crisis are a fertile breeding ground for corruption. Keeping corruption at bay during an emergency of the magnitude of the viral pandemic can be the difference between life and death, flourishing national wealth and destitution, and sufficient food supply and starvation. Countries and agencies have voted billions of dollars for medicines and interventionist welfare schemes for individuals and businesses in distress, and these funds must be dispensed with utmost transparency.

The National Association of Seadogs (Pyrates Confraternity), in its humanitarian and advocacy mission remains at the forefront of combating the varied ills militating against the attainment of a just society. At our essential core, is a tenacious abhorrence of corruption: money laundering, fraud, and other forms of impunity. We, like many other Nigerians, are appalled at how bribery in public and private life, even in ways that are not immediately apparent, has inhibited national development, enthroned mediocrity and inefficiency, encouraged unfair competitive advantages, while significantly eroding society's moral ethos.

We view corruption as the most potent culprit of Nigeria’s retarded socioeconomic development. We recognise how it has weakened our democratic institutions by subverting popular will in elections, and how the rule of law has, most times, been deliberately subjected to all sorts of retrogressive manipulations intended to delay or deny justice. We believe that the fight against corruption is one that should involve every Nigerian citizen, and not confined to governmental actors alone. We need citizens’ engagement and our collective action to effectively confront the scourge of corruption, with the right attitude, knowledge, and commitment to transparency.

The National Association of Seadogs (Pyrates Confraternity) therefore urges governments at all levels in Nigeria to key into the very germane theme for this anti-corruption commemoration. For this reason, we resolutely propose for the government’s consideration the following anti-corruption measures:

1. All Anti-corruption Institutions and ancillary bodies be given the much-needed teeth to stop barking and start biting without prejudice.

2. There should be a total reformation of the criminal justice system and the police in order to engender a more modern, proactive judiciary, and an honest, people-friendly policing service respectively.

3. Government at all levels must, as a matter of urgency, initiate the exemplary process of cutting the corrupt and unwieldy cost of governance. This should begin with a holistic pruning of the bizarre remuneration and perks for political office holders, which have made politics attractive as a shortcut to filthy lucre.

4. The national anti-corruption strategy should be removed from the immediate purview of, and dependence on, the Presidency. Otherwise, it will remain feeble, myopic and prone to political exploitation.

5. The national orientation policy should be rejigged and empowered with a mandate that will birth a reformed civil service and civic space rid of the tribalism, nepotism, lobbying, and sleaze they have been associated with.

6. In line with this year’s International Anti-corruption Day, government must ensure that all those saddled with the important task of managing the resources for alleviating the harsh medical and economic effects of the COVID-19 pandemic, must appreciate the onerous responsibility, and help Nigeria and its citizens recover with integrity by standing #UnitedAgainstCorruption.