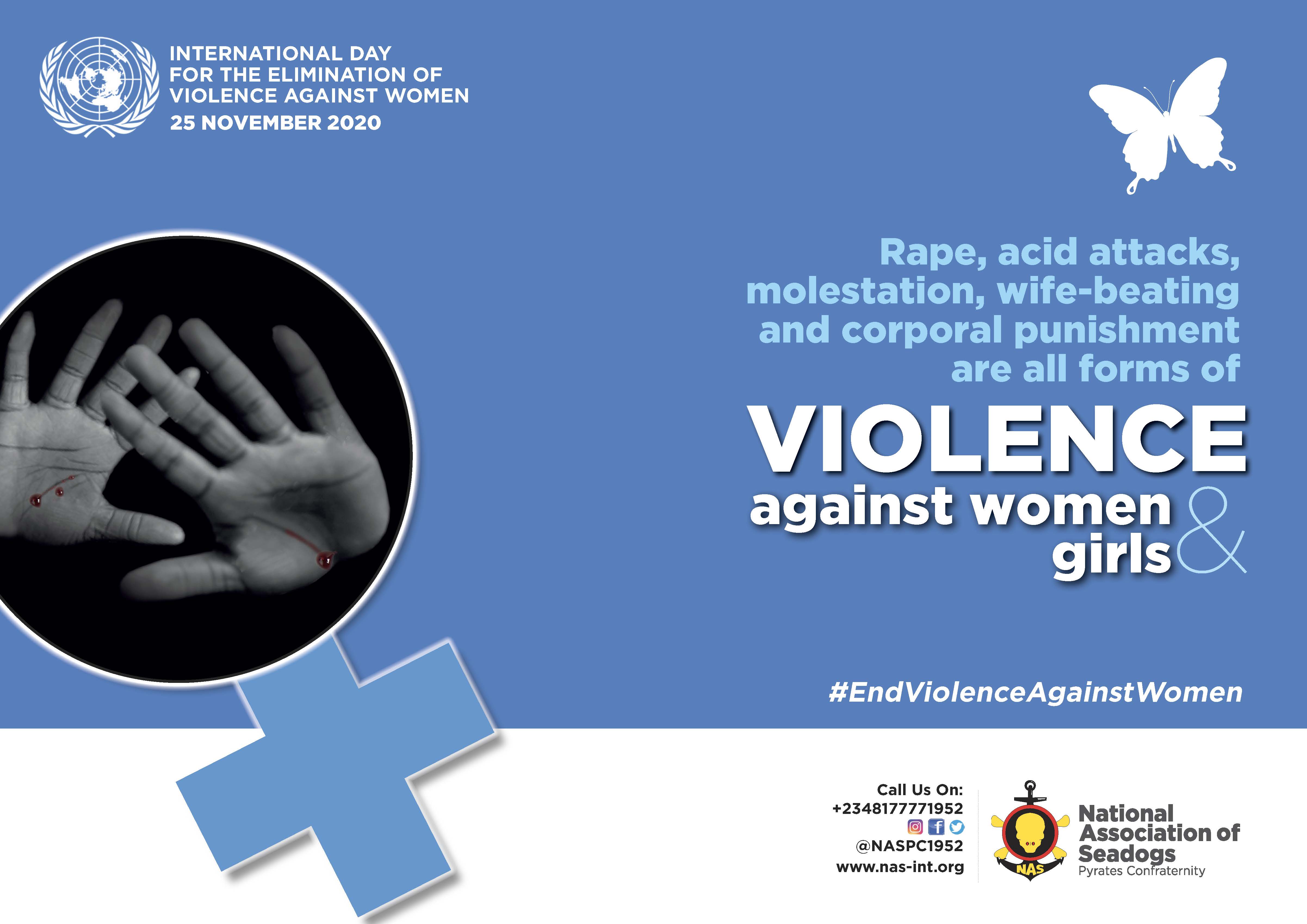 The United Nations (UN) Women highlights that violence against women and girls is one of the most widespread and gravely human rights violations in the world today. Its impact ranges from immediate to long-term physical, sexual, and mental consequences, including death. Violence against women and girls does not only negatively affect their general well-being and prevent them from fully participating in society, but it also affects their families, communities, and countries, with its attendant tremendous costs from healthcare and legal expenses to losses in productivity and impacts on national budgets and development.

As a global human rights and advocacy organisation, the National Association of Seadogs, Pyrates Confraternity, has often reiterated that the issues of rape, domestic abuse, and workplace assault have been on the increase. Unfortunately, the Nigerian government efforts have not been responsive enough to mete out punishment to perpetrators of those crimes. Moreover there is also a near absence of victim support and compensation for the ridiculously small number of cases being prosecuted.

In marking this year’s International Day for the Elimination of Violence Against Women, we identify with the plight of women and girls experiencing violence. We are highlighting the virtues of womanhood and women’s inalienable rights to life and equal opportunities and re-emphasizing that violence against women and girls remains an obstacle to achieving equality, development, peace, and fulfilment in our society. We are consequently demanding zero tolerance to this inimical act in all its forms, and particularly that any perpetrator of this harmful practise should face the judicial consequences.

To ‘act the talk’, NAS chapters worldwide are holding radio and television talk-shows, lectures, and roadshows with leaflets to sensitize the public on this gender-based violent act that gravely violates women and girl’s rights. Our main goal is to bring the issue to the front burner of public discourse to encourage victims to confront their victimisation by speaking up and to discourage would-be assailants.

Our activities and social activism are not only carefully designed to raise public awareness of gender-based violence in our society, but to also elicit institutional action plans from authorities in Nigeria. We take it as imperative of our social advocacy responsibility that our government and its agencies must be compelled to make and enforce laws and policies that protect women against all forms of violence including rape, domestic abuse, deprivation, discrimination and all other identified ways in which women suffer victimization.

We therefore recommend the following steps to address, tackle, and eradicate violence against women and girls in Nigeria:

The National Assembly passed the Violence Against Persons (Prohibition) Act, VAPP in May 2015 to deal with cases of rape in Nigeria. We urge the State House of Assemblies not yet to domesticate this law to do so. Furthermore, the Federal and State Legislative arms should enact and follow up on existing laws that protect women against all forms of violence including intimate partner violence, sexual harassment, human trafficking, female genital mutilation and child marriage.

Our educational curriculum must be reformulated to include the teaching of young children in primary and secondary schools on the dangers of violence against women in order for the boys and girls to grow up with the conscious understanding of these dangers, and as grownups, the women will be imbued with courage and confidence to speak out when they encounter such issues.

Functional Police hotlines where people can quickly report the incident of violence against women should be provided and shared with the public, and when cases are reported, they must be thoroughly investigated and culprits brought to book.

There has to be more and constant public sensitisation in print, electronic, and on social media on the dangers of violence against women and girls. And at home, parents themselves have to take the initiative, as part of their parental duties, to educate their young male children on the harm inherent in the act of gender-based violence that they may grow up to become responsible and responsive brothers, husbands, and fathers, and even ambassadors of the fight against all forms of violence.