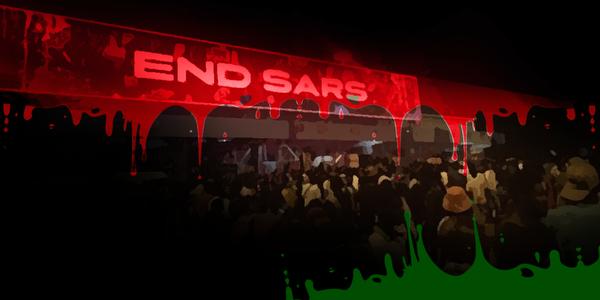 These were not just onslaughts on the material and temporal but also deeply oppugnant to the patriotic and peaceful objectives of #EndSARS. These, symbolised in the numerous Nigerian flags accompanying the protests and the National Anthem the young protesters sung over and over again. Enigmatically, even as the lines of “the labours of our heroes past”, was breached by the savage staccato of assault rifles soaking our green-white-green in the blood of innocent Nigerians.

We must not forget that for many days, the #EndSARS protests continued as an organised, well-coordinated and widely acknowledged peaceful protest by energetic and innovative Nigerian youths. According to Amnesty International at least 12 protesters were killed at the Lekki Toll Gate while several others, the numbers yet to be determined, were injured.

Who authorised the Lekki shooting? This remains a grave question that the Federal Government and the Military High Command must answer through a transparent investigation that should culminate in the perpetrators standing trial. Cover up will be counter productivity. We expect that the Governor of Lagos State will do all in his power to ensure that all those who have lost their lives and suffered material losses are identified and properly compensated. This should also be the case across different cities where innocent Nigerians and policemen were attacked. The National Assembly must also commence the process of delegitimizing the use of live bullets as a tool for crowd control.

While it was disappointing that in his broadcast to the nation yesterday, President Buhari did not make any reference to the Lekki shooting or empathise with the tragedy that happened, his government still has the opportunity to demonstrate leadership in ensuring justice for the innocent victims. We acknowledge positively the President's exhortation to the security forces to conduct their duties within the ambit of the law. However, the narrative of the purposeful protest should not be swapped with the criminal activity of opportunistic hoodlums or 5th columnists out to discredit the protest and stifle its patriotic and optimistic objectives.

Good governance in Nigeria was a key election campaign message of the President and the recent events present the possibility for him to take more seriously the genuine hardship and insecurity in the country. Listing the poverty alleviation policies of his government, was helpful information. It is important to backup lofty government projects with efficient checks and balances. Incisive follow up investigations are necessary to ensure that these benefits are not diverted away from the people these key policies are meant for.

There has to be a high-level investigation into all the reported breach of prison and correctional facilities. It is expected that there would be CCTV cameras in all prisons as part of the security. Are the security facilities of the prisons adequate? Are the prison wardens properly provided for in managing attempted prison breaks? The ease with which the violence spread also highlights the ongoing demand for a full reform of the Nigeria Police into a more professional and highly trained service. It also emphasises the urgent need of addressing the citizens’ concerns about systemic misgovernance.

The Federal Government has the responsibility to create an atmosphere for a sincere dialogue on the legitimate demands of the youths. A single policy announcement with sprinkles of lacklustre speech is not enough to assuage the citizens lack of confidence in its leaders bearing in mind several failed attempts at reforms induced by years of impunity, corruption and wasteful governance. There has being too many failed promises and repeatedly dashed national hope. Hence, it is incumbent on the government to restore confidence and faith in its citizens. The Federal Government must show seriousness on its commitment to Police reform by immediately commencing the trial of the indicted 35 officers of the disbanded SARS in line with the recommendations of the 2019 Special Presidential Panel on SARS.

We commend the young leaders of the #EndSARS campaign for the peaceful and empathetic protests they have run. This show of effective all-hands-on-deck organisation, unity of purpose, accountability, selflessness, empathetic support and care for each other engenders hope in a future and better Nigeria. However, there must be concerted effort to guard against fake news and misinformation, actively ensuring that no false information is put out in the name of the protest. Be vigilant and beware of fifth columnists.

We appeal to all Nigerians to remain calm, peaceful and lawful. We must not allow the poison of tribal discord to be injected into the demands for greater accountability, not just in the police, but across the entire apparatus of government from the Federal to the Local Governments. Without a doubt, if an improved Nigeria Police Force, as well as better governance is achieved in this struggle, it will be for the good and benefit of all Nigerians without exception.

In the same breath, Nigerians must remain united in vehemently opposing those who choose violence as an option, or seek to exploit the genuine and peaceful #EndSARS protests for their nefarious and destructive objectives. Attacking prison and correctional facilites, police stations and policemen is unacceptable and smirks of the same impunity and brutality that the #EndSARS protest represents. Destroying government and private properties, desecrating important traditional and cultural places is foolish, callous and counter productive. If we destroy our own city and the properties of our neighbours, what sort of community would we have?

We commiserate with the families of all those who have lost loved ones and wish all those who were injured, a speedy recovery. This includes genuine protesters as well as public servants diligently and lawfully carrying out their official duties. May their death and wounds, “the labours of our heroes past”, never be in vain.

The struggle of Nigerians for the attainment of a just society continues as we work with heart and might for One Nation bound in freedom, peace and unity. May our leaders be guided right to serve for a noble Nigeria. We must not forget that at the heart of #EndSARS is the deep and resolute yearning for our beloved country to become a place where young and old can dream, with equal opportunities for self-fulfilment.

A Nigeria where, though tribe and tongue may differ, in brotherhood and sisterhood, we all can thrive, great lofty heights attain to build a nation where peace and justice shall reign. This is the Nigeria, that just society, we must continue to seek, beyond lights out at Lekki.