Ensuring #OurVotesCount beyond Campaign promises: Education and Awareness for Citizens’ Participation in Governance after elections 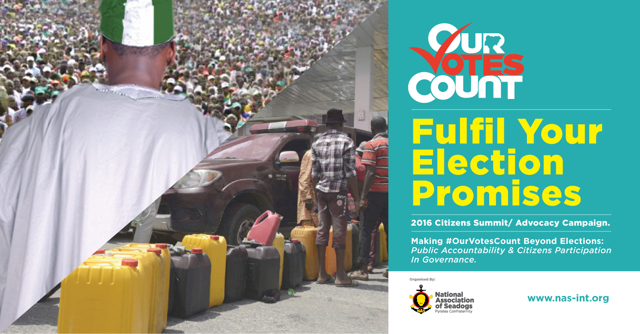 Governance by general definition relates to "the processes of interaction and decision-making among the actors involved in a collective problem that lead to the formulation, reinforcement, or reproduction of social norms and institutions".

Governance, by implication is a two-way traffic and to guarantee positive outcomes from its activities, there must be, amongst other things accountability, transparency, responsiveness and observance of rule of law, hence, the requirement for broad participation.

The average Nigerian citizen had hitherto exhibited apathy towards participating in governance activities erroneously classified as “government business”, especially elections. That indifference has translated to an incremental depreciation in their quality of life. As is, Nigerians can hardly be guaranteed an appreciation in the quality and quantity of life unless there is a conscious, concerted effort to get more involved in governance and government business.
Citizens’ Summit is an initiative of the National Association of Seadogs, Pyrates Confraternity which aims to encourage citizens’ participation in governance, strengthen Nigeria’s democratic processes and practices through a combination of activities that engender greater participation in elections and the electoral process. This objective is achieved by creating nationwide platforms, articulating and leading discussion on topical issues, factors and influences affecting legislation, planning and conduct of elections.

Last year, the 2015 Citizens’ Summit addressed issues bordering on voter education; ensuring that the people were ready, willing, and adequately informed to exercise their franchise without undue interference or inducement. As part of the post mortem of the 2015 general elections, this year’s 2016 Citizens’ Summit is designed to raise awareness on participatory governance and ensure the electorate understands that their role goes beyond casting and defending their votes during elections. The Summit highlights the imperative for the electorate to hold elected officials accountable to their campaign promises and insist that pre-election rhetoric must be matched with verifiable performance; that is the guarantee for good governance.

Be Aware. Be Alert. Show interest and remain inquisitive, as the price for freedom is eternal vigilance.

To ensure successful performance evaluation, the questions that must agitate our minds are, how involved are the electorate in governance? Have they been adequately consulted and integrated in policy formulation? If yes, to what extent? How have they shown interest and been involved in the implementation of decisions already taken?

That power belongs to the people is a truism. The people must however understand the scale of this domiciled power in their votes. As such, it is of utmost importance that the electorate realizes the nature and scale of the rights their votes accord them and the accompanying responsibilities in exercising them legitimately in electing leaders of their choice. This is the essence of the 2016 Citizens’ Summit.

The specific objectives the National Association of Seadogs, Pyrates Confraternity sets out to achieve through the 2016 Citizens’ Summit are to build citizens’ confidence in evaluating and monitoring government performance; to enhance electoral accountability; to educate citizens on the imperative of holding government accountable; to facilitate discussion; to educate citizens on post-election roles; and lastly, to collate views and reactions from the electorate regarding the 2015 general elections. These will be for the purposes of evaluating the effectiveness of processes, procedures, subsisting legislation and facilitating feedback not only to government and its relevant agencies directly but also to the electorate and the general public through our website www.ourvotescount.org.ng

In conclusion, our mission in promoting the 2016 Citizens’ Summit would have been accomplished if we all united and ensured that our votes count beyond the campaign promises and elections.